The massage gun, which is developed for sports, usually vibrates stronger than common household massagers. Many users believe that the massage gun can help improve blood circulation, relax muscle tension and regain energy quickly. Is it really that amazing?

The high-frequency vibration of the massage gun can send the force to inner muscles.

The speed range of a massage gun is from 2000-3000 percussions per minute, and the vibration sends the force through inner muscles helping relax muscles, improve blood flow, speed up the consumption of lactate and reduce muscle soreness. Household massagers and masseuses can only massage the superficial muscles because muscles have a certain thickness. The wholesale massage guns, however, can send the force to inner muscles with its high-frequency vibration and thus works better.

The massage gun has gained popularity among sports enthusiasts who hope to relax muscle tension and improve athletic performance. But quite a few people get injured because of an incorrect use of the massage gun. Not all pains can be relieved by the massage gun and it also matters how long and how frequent you use it.

I. Do not use a massage gun when you suffer from muscle strain and muscle inflammation

The massage gun can reduce strain such as muscle soreness and muscle tension. But it could cause acute inflammation if you feel the muscles are in pain and swollen. If so, do not use a massage gun or it might aggravate the pain.

A man experienced acute pain in the muscle groups behind his right thigh after running. There was no redness or swelling at that time so he thought it was muscle soreness and fatigue. There was no improvement after the cold compress, so he used a massage gun to relax the muscles behind his thigh. Then the pain was relieved immediately which made him think the pain was completely gone. He woke up the next day and felt the pain and swelling on his right thigh, which made it difficult for him to walk and he later went to the hospital. He was told that the muscles were injured and using the massage gun only made things worse so he had to go through physical therapy.

II. Use your massage gun for 5-10 minutes on the same part

The massage gun is used for muscle groups such as hips and quadriceps femoris muscle, because the muscles are large and thus require deeper massage. As for the shoulder, where the muscle layer is relatively thin, it may cause bruises if being pressed with too much force. So it is recommendable to massage our shoulders gently with hands.

When it comes to how long should we use the massage gun, we recommend 5-10 minutes each time, and do not massage the same body part for too long. Every massage gun comes with a variety of different interchangeable massage gun head attachments for people with different needs. There is bullet attachment which is suitable for smaller muscles such as forearms. And the sharper and thinner the attachment is the more concentrated it is to release the force. And it is easier to injure the muscle tissue so the time should be controlled within 5 minutes. However, the wide range of a ball attachment allows it to massage a larger part of the muscle with moderate force, so we recommend a maximum of 10 minutes when using a ball attachment.

III. It can not relieve the pain in the joints

The massage gun can only be used on muscles not joints which include bones and ligaments; because when high-frequency force is transmitted to the bones, it will rebounds to the ligaments and injure them with excessive stress. A man who had ankle pain after running used a massage gun to relieve the pain, but the ankle swelled the next day. The ankle muscles are thin, and the massage gun works like a hammer that keeps hitting the ankle which finally injures the fascia.

Massage can improve blood circulation and thus reduce muscle soreness.  However, joint pain can be caused by different reasons, such as costochondritis and ligament strain. These can only be treated by stretching or strengthening muscles   rather than vibro massage. And if necessary, you should ask a physical therapist for help.

IV. To avoid harming blood vessels and internal organs, do not use it on your neck, chest, abdomen and armpit

Do not use a massage gun on the following body parts

The carotid artery and the femoral artery

Though the aortic wall is relatively thick, it can be damaged if constantly being under too much weight. It will lead to blood clots and an ischemic stroke can happen once the blood clots shed and flow into the brain blocking the cerebral vessels.

Using a massage gun on the thorax might injure the internal organs such as the heart and lungs.

The armpit is covered with lymph and nerves, so it may damage the nerves and lead to the palsy in your hand.

V. Smartphone addicts should avoid using the massage gun because their muscles are not flexible enough

Muscle soreness caused by poor posture or the lack of muscle strength, which  does not necessarily require the use of such a high-frequency massager.  People, particularly those who have a sedentary life and have poor muscle strength and flexibility, usually can not stand the high-frequency force of the massage gun and are prone to injury. In fact, you can relax by massaging it with you hands if you have a pain in the back, and remember to be gentle so you wouldn’t hurt yourself.

Speck is the leading custom massage gun manufacturer in China. We provide custom design and custom manufacturing service. You just need to tell us your design idea, our engineer team will handle the others for you. We will be more than happy to sign NDA with you before start.

Need an Reliable Manufacturer for Your Custom Design Massage Gun? 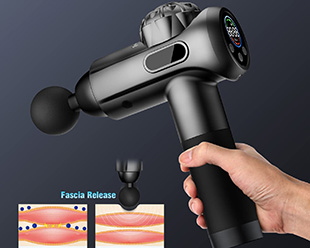 Speck is an experienced OEM/ODM muscle massage gun with R&D support from tooling design to final shipment for global customers.